The perfect gift
for animal lovers

Easy to assemble and fun to build!
Shop Now

At Geotoys, we believe that kids who learn about the world will do a better job of caring for it when they grow up. Learning geography through play encourages curiosity and questions, the keys to an open mind. And learning about other continents, countries, and capitals sparks the imagination, allowing us to travel and explore. Easy to assemble and fun to build, Eugys are cute creatures made from cardboard! Numbered pieces come together with non-toxic glue (included) to make a contoured creature in about 20 minutes. Designed in New Zealand; ages 6 and up.

Spend time with loved ones

Great for all Ages

At Geotoys, we believe that kids who learn about the world will do a better job of caring for it when they grow up. Learning geography through play encourages curiosity and questions, the keys to an open mind. And learning about other continents, countries, and capitals sparks the imagination, allowing us to travel and explore. We hope you and yours like our products, and please feel free to email us anytime (info@geotoystore.com).

What our Customers Say

This puzzle set is an excellent value!! I am using these puzzles for game time in my Classical Conversations Challenge A class, and the students love them!! I love them too!

Our 6-year old son still loves pulling these puzzles out to do them together. They are very durable pieces and we've had these for THREE years now!

We are having so much fun with these GEO Puzzles. My son is in the sixth grade and is studying world geography so these puzzles really help. Great for family competitions!

My boys 5 and 9 years old loved this! The different puzzles were easy to assemble and break down. They loved that the pieces were in the actual shape of the countries!

My son LOVES these puzzles, especially this one. We got them when he was 4 and after helping him the first couple times he could put it together by himself. The pieces are sturdy and colorful.

Grandchildren were very happy with this puzzle.

A
Magnetic Puzzle Board Ashley Valderrama

The pieces are cut well and adhere nicely to the fridge, but the map only shows a small portion of the city. Got it to learn some geography with my son before our trip, but the map is only about 20% of the city and has very few fine details

My 4-year-old grandson loves it. He's already put it together multiple times (including face down!). He's constantly comparing it to the North America puzzle and his globe. I suspect the remaining ones will be following. He's a sponge for geography, and these puzzles absolutely fill the bill!

If there's a fault with this one and the World puzzle, it's that the bottom pieces do not interlock in the center, making it easy for the puzzle to be "split" unnaturally.

E
6+ GeoPuzzles Set in One Box — Educational Geography Jigsaw Puzzles for Ages 4 and up Elizabeth Rozich
My Daughter Loves Them All!

We have really enjoyed putting these puzzles together as a family! We are all leaning together! 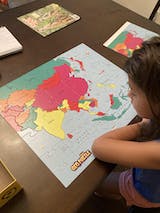 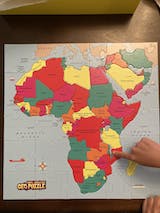 My four years old is obsessed with these puzzles! He can put them together in minutes and knows what countries go where and in what continent! He is so smart it's mind-blowing! Thank you for making these with the countries as single pieces as best they can be so my little one can learn them!! 😍

I bought the World jigsaw puzzle (69 pieces) for my 4-year-old grandson. He asked for it after I'd previously given him the U.S. States puzzle. He is thoroughly "into" the world. He knows the names of the countries, where they go. He assembles it, takes it apart, and does it again.

I also bought the GoeCards World for him to use - later! - with his parents. Amazingly, he's super excited about them already. He's obsessed with numbers (populations, etc.) and just soaks up the information. I watched him on FaceTime last night. After he finished the puzzle, he turned to hims mom and said "Let's go play geocards. Now!"

These products are both absolute winners as far as I'm concerned.

Bought California got Alabama. Will not stay together.

The puzzle is a good way to reinforce global awareness.

The young lady I bought it for loved it!

This is a great project for winding down after dinner without a screen or screen. My 4 year old enjoyed it immensely- a dot of glue keeps things together nicely

Easy to assemble, fun to do, cute at the end

These are cute and relatively easy to complete. Downside being my son finished it in about 10 minutes and once it's made there isn't much to do with it. It's unique though and he had fun completing it.

Received in good condition & prompt delivery. Bought these for my kids & so pleased with the top quality of this product & the multiple fun & cute character selection. The kids & adults love them of all ages, fun to put together & display. Highly recommend & I've bought several for stocking stuffers & gifts.

Received in good condition & prompt delivery. Bought these for my kids & so pleased with the top quality of this product & the multiple fun & cute character selection. The kids & adults love them of all ages, fun to put together & display. Highly recommend & I've bought several for stocking stuffers & gifts.

My fiancé loves building anything and everything. You name it, he’s probably built it. From LEGO to gundam to metal earth models. He was very excited to try this out. Everything you need for this build is included. And the instructions were very easy to follow. A simple build for an adorable dino!

Any of these, which I purchased 5 of, are absolutely great. They make great gifts and are just darn great to look at.

The puzzle was simple and the result was fun!

You are going to love this project! Easy… fast…. Everything you need comes in the kit!

I get these for Grandson, a new one each time we hang out. They are fun, easy and great looking. Will collect all the different ones. They have lots. Will keep our visits fun for all 55 animals.

The little unicorn is super cute! It is easy and fun to assemble. The result is a fun little unicorn for display.  I think anyone age 6 and older would enjoy this model. It would make a cute gift, too.

This EUGY shark kit is simple and fun to build for kids and adults alike! The result is a neat little 3D layered model. The kit includes everything you need - instructions are printed on the back of the kit box, and the eyes and glue are also provided. The card stock is pre-cut and can be gently popped out without issue. I really like the design and colors of this shark. It makes an unique gift perfect for a party favor, stocking stuffer etc.  An important note: the display image shows the EUGY brand logo front and center on the model, but don’t worry! The kit has two options - you can choose to build it without the logo if you desire.  I really enjoyed building this shark, and now I have a cool model to add to my bookshelf!

Subscribe to get special offers, free giveaways, and once-in-a-lifetime deals.